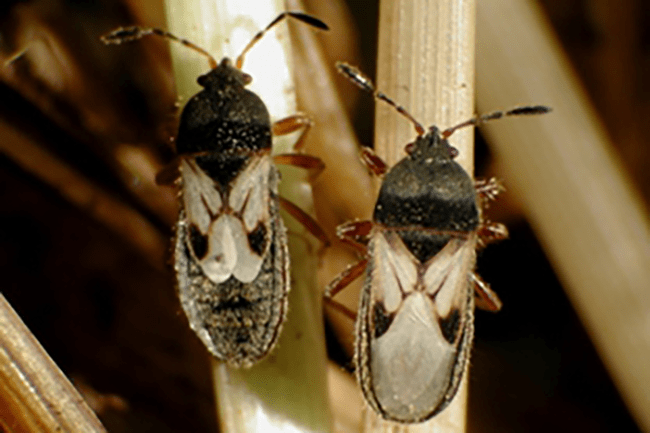 The hairy chinch bug is a native species of insect that has adapted to live in stands of turfgrass. It feeds on a large variety of grasses and grains and especially likes perennial ryegrass, Kentucky bluegrass, red fescues and creeping bentgrass. They can be one of the most destructive turfgrass pests of home lawns and high mowed golf course roughs. They can be found in the northeastern U.S. from Virginia to Maine, west to Minnesota and throughout Michigan. 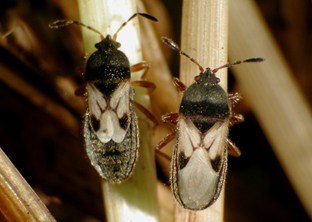 Chinch bugs can injure lawns when conditions are warm and dry. Their damage is most frequently observed in July and August in central Michigan and is often attributed to some other agent.

The presence of irregularly-shaped yellow patches that turn brown and die is characteristic of chinch bug injury. Clumps of clover and other non-grass weeds may survive in these areas. Plant damage results not only from withdrawal of sap, but from chinch bug saliva, which contain substances toxic to the plant.

Drought or heat stress may cause similar browning of turf, but proper watering will quickly rejuvenate the lawn. Turf injured by chinch bugs will not recover as quickly.

Adults are small, black bugs, 0.1875-inch long with white wings. Larvae are smaller than adults and wingless. The youngest larvae are brick red with a transverse white band in the back; larger larvae are mostly black.

The youngest larvae are brick red with a transverse white band in the back; larger larvae are mostly black. The most serious damage is caused by larvae feeding in late July. Adults overwinter in protected areas near lawns. They emerge in late spring and early summer. When temperatures reach the 70s, they mate and lay eggs in the leaf sheets of grass plants.

Larvae require approximately four to six weeks to develop to the adult stage. First-generation larvae occur in late June to July, and second-generation larvae are present in mid-August. Only one generation occurs in areas of Michigan north of Lansing. 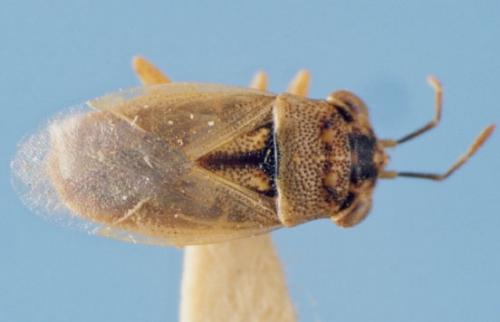 Rain in July during egg hatch will reduce chinch bug larval survival. This mortality is due to a naturally occurring fungus (Beauveria spp.) that attacks the bugs during cool, wet conditions. The fungus is ineffective during hot, dry periods when chinch bugs cause the most injury.

How To Diagnose Chinch Bug Damage

Closely examine the green borders of the dead or dying turf areas for the presence of nymphs and adults. These bugs generally move outward from the center of the initial infestation and feed on living grass. Chinch bugs can be found by carefully pulling away debris in thatch from around the base of clumps of grass. If more than 15 bugs are found in two minutes, chinch bug injury is likely to occur. Check several different places in the lawn because the bugs may be concentrated in one area.

Another way to look for chinch bugs is to use a coffee can with the bottom removed. It can be pushed into the turf and filled with water. Chinch bugs will float to the surface after several minutes. This technique should be repeated five to six times throughout your lawn to determine the distribution of bugs. 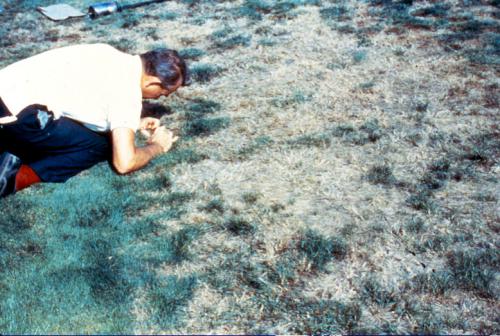 If more than 15 chinch bugs are found in two minutes of searching, or per coffee can sample, infested parts of a lawn can be sprayed with an insecticide containing permethrin, bifenthrin, lamda-cyhalothrin or cyfluthrin. Granular insecticides are not as effective against chinch bugs as liquid sprays. Wear rubber gloves, long pants and rubber boots when applying insecticides to minimize exposure. Keep unused pesticides in their original containers out of reach of children or pets.

Since chinch bugs are usually not a problem in well-irrigated turf, diligent watering of turf during hot, dry weather will prevent chinch bug problems.

Call My Fertilizing Company today at 248.923.1000 to get help with managing Chinch Bugs.

Liquid Aeration… What Is It???

What is aeration? Webster's dictionary defines aeration as "to supply or impregnate (something, such as…