What is aeration? Webster’s dictionary defines aeration as “to supply or impregnate (something, such as the soil or a liquid) with air.  My Fertilizing Company defines lawn aeration as “the process of reducing compaction and allowing vital nutrients, air and water down to the root zone”. The best time to aerate is in the spring or fall.  There are 2 types of aeration: Core Aeration and Liquid Aeration.

The most common form of aeration can be called a few different names: Core Aeration, Mechanical Aeration and/or Conventional Aeration. This is the process of removing thousands of tiny plugs from the lawn in order to create holes from where the plugs were removed. The holes reduce compaction, allowing vital nutrients, air, water and seed down to the root zone.  Yup, you heard it, I said seed.  A core aeration, when combined with an overseeding, is one of the best options if you want to thicken up a thin lawn.

Liquid Aeration is the process of applying natural components to a lawn in order to reduce thatch. By reducing thatch, a liquid aeration will strengthen roots, reduce soil compaction and allow vital nutrients, air and water down into the root zone.

University of Georgia professor Gerald Henry performed a test to compare the results of turf that was core aerated, liquid aerated and an area was not aerated to keep as a control.  Here are some of the results:

The results of the study basically said that unless you have extreme compaction or you plan on core aerating and overseeding, liquid aeration offers the same results. 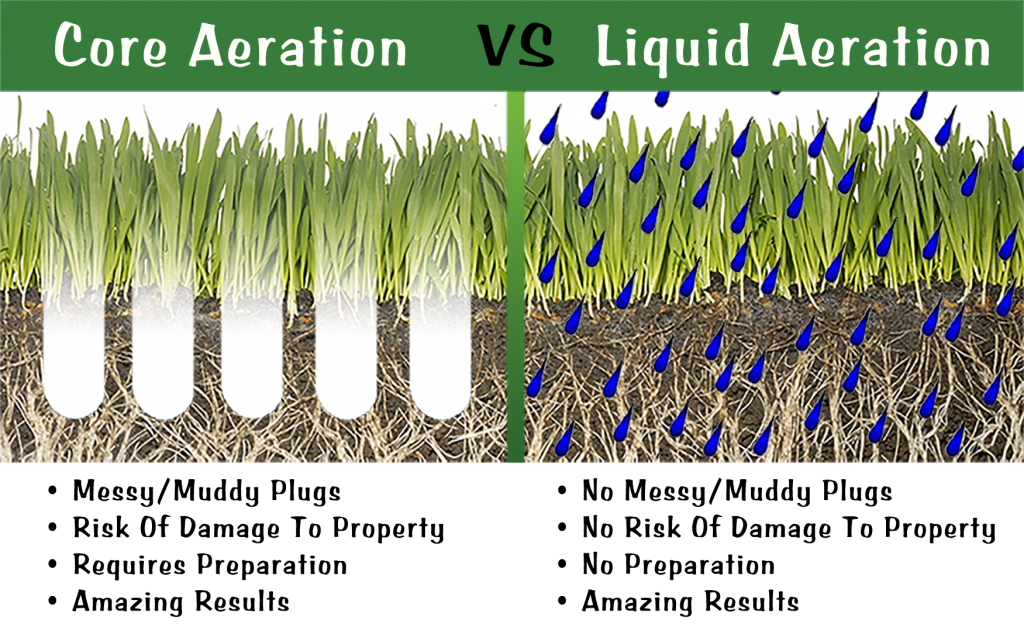 While liquid aeration isn’t a direct replacement for core aerations, it does put ease on the homeowner. As seen in the image above, there is no preparation or real after care needed.  While a liquid aeration app does need to be watered in, if you don’t water it in,  it will just sit there until you do water it in or it rains.

While both core aeration and liquid aerations each have their places, which one should you use?  Here at MFC we think both are beneficial  to keep your lawn healthy. We suggest a liquid aeration in the early spring. This allows the product time to work as we get into the more challenging months. Then once the temps cool off in the fall, we suggest to have a core aeration combined with overseeding done.

Set It And Forget It? NOOOO! More Watering Tips…

Proper watering is the single most important thing you can do to have a beautiful,…